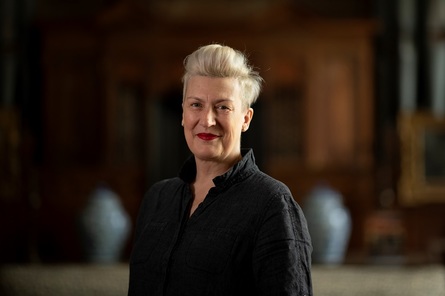 Benjamin Britten - In the midnight hour

Herbert Howells - When there is peace

Sarah Connolly was made a DBE in the 2017 Birthday Honours, having previously been awarded a CBE in the 2010 New Year Honours. In 2020 she was made an Honorary Member of the Royal Philharmonic Society in recognition of her outstanding services to music.

She has sung at the Aldeburgh, Edinburgh, Lucerne, Salzburg and Tanglewood Festivals and the BBC Proms where, in 2009, she was a soloist at the Last Night. Opera engagements have taken her around the world from the Metropolitan Opera to the Royal Opera House, the Paris Opera, La Scala Milan, the Vienna and Munich State Operas and the Bayreuth, Glyndebourne and Aix-en-Provence Festivals.

In the 2021/22 season Dame Sarah returns to the Gran Teatro del Liceu in Barcelona for Geneviève Pelléas et Mélisande and to the Metropolitan Opera to reprise the role of Gertrude in the American premiere of Brett Dean’s Hamlet. She appears in concert with the CBSO, the Wiener Symphoniker and the Philharmonia Orchestra and gives recitals in Amsterdam, in Barcelona and at the Aldeburgh, Leeds and Oxford Lieder Festivals.

"The main cause for rejoicing, however, was to be in the presence of an artist at the peak of her very considerable powers and be part of a musical journey that was both thrilling and moving in equal measure. Connolly has always impressed – phrasing, tone, vocal colour and the impeccable way she articulates the text (here in faultless German) are indivisible from one another – yet on the evidence from the glorious music-making on show here, there are not many singers these days able to match her innate musicality."