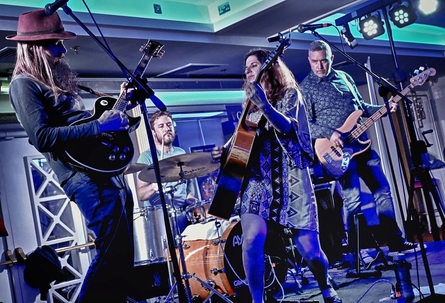 Her voice has been described as sounding like “an opera star running through her scales” (Eamon Carr, In Dublin Magazine) and yet her music is steeped in blues, roots, contemporary folk and a whole lot of soul.

A stalwart of the Irish Blues Music scene, Clara Rose has toured nationwide promoting her acclaimed, independent album releases. Both solo and with her band she has played headline shows at all major Irish blues festivals since 2010 including, Harvest Time Blues (Monaghan), Danny Boy Jazz and Blues (Limavady, Co. Derry) and Blues on the Bay (Warrenpoint, Co. Down).

Her recent album release, 'Live, LIVE, Love' is a live album featuring the Clara Rose Band plus special guests. It is a rockin' set list that will whet your appetite for her live shows!

With her strong, Fermanagh family roots, Clara Rose is looking forward to playing this show featuring all aspects of her music, along with some special guests, while feeling right at home on the shores of Loch Erne.