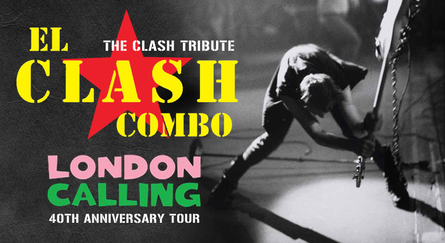 In an era where political protest is widespread, the Revolution Rock music of The Clash is as relevant today as it was forty years ago. London Calling is regarded as their artistic pinnacle. Rolling Stone named it the best album of the '80s and ranked it at number eight on their list of the 500 Greatest Albums of All Time. Join El Clash Combo, formed in 2005, as they perform this classic punk album in its entirety as well as other Clash hits, including Rock the Casbah, I Fought the Law and Should I Stay or Should I Go? Should the world survive long enough for critics in 2480 to list the finest records of the preceding 500 years, London Calling will be a strong contender for top honours - Billboard.com

Booking information: Please note in the event of the main auditorium seating selling out, additional seats at the front may become available; these seats may restrict your view in Row A.