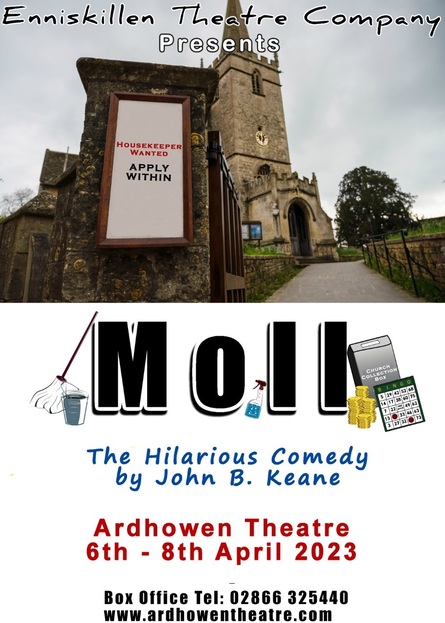 MOLL, first produced in July 1971 in Killarney, is a comedy set in a rural presbytery in Kerry, where the newly appointed Moll, a priest’s housekeeper, takes over a parish house with a “divide and conquer” strategy.When Canon Pratt and his two curates, Father Brest and Father Loran, lose their esteemed Ms Bottomly, they must recruit a replacement to carry on with the cooking and cleaning. Ms Maureen Kettle, (Moll) is successful at interview and it’s not long until she has the Canon wrapped around her little finger, providing him with sumptuous meals and lots of attention. The Curates, however, struggle to survive on restricted diets and Moll’s strict methods of house management.

When it comes to the question of Moll’s pension, comedy and chaos ensues, and Moll proves to be an unstoppable force.

Enniskillen Theatre Company are delighted to present this play, which promises an evening of belly laughs and joy!