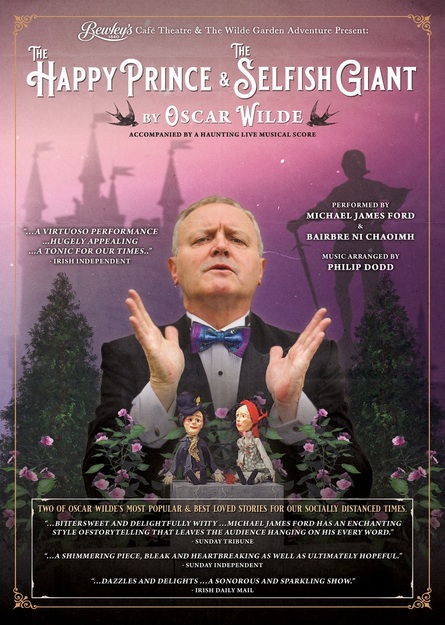 The Happy Prince and The Selfish Giant Children’s Show

Fermanagh Live presents an enchanting production of Oscar Wilde's best loved children's stories, 'The Happy Prince' and 'The Selfish Giant' in The Enniskillen Hotel. The show will be staged exactly a week before Wilde's birthday. Produced and performed by acclaimed Irish actor Michael James Ford, The Happy Prince - thought to have been inspired by Wilde's view of Cole's Monument during his time at Portora Royal School in Enniskillen - tells the tale of a gregarious swallow who befriends a melancholy statue while flying to Egypt. The bird helps the prince alleviate the suffering of his poor citizens and in doing so learns profound truths about the nature of love and suffering. This two-part show is paired with 'The Selfish Giant', Wilde’s delightful exploration of selfishness, love and redemption. Michael James Ford co-stars with well known actress Bairbre Ní Chaoimh, along with three enchanting puppet children created by Martin ‘Gepetto’ Cahill. The show will be accompanied by live music arranged and performed by violinist, Philip Dodd. Suitable for children aged 5 upwards. Handmade paper swallows, made in association with Arts Over Borders, by children from primary schools across Enniskillen, will be on display in the venue during the performance.

Please note this event is being held at Enniskillen Hotel