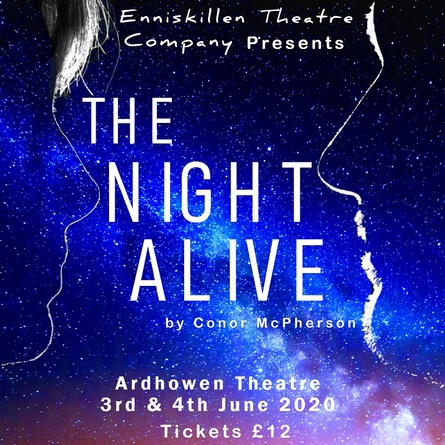 Following on from their success in 2019 with their inaugural production Stones In His Pockets, Enniskillen Theatre Company are excited to bring their 2020 Drama Festival entry, The Night Alive back to the Ardhowen stage.

The Night Alive, written by Conor McPherson, explores the lives of a few lost souls, each with their own story, and a chance connection that brings them all together. Tommy is a man who has been drifting through life for the past two years, living downstairs in a makeshift bedsit in his uncle Maurice’s house. Having failed in business and become estranged from his family, Tommy gets by making ends meet through whatever crackpot schemes he can think of. He is often helped by his slightly younger friend Doc, a lost soul, who is innocent and homeless. When he rescues a young prostitute named Aimee who has been badly beaten, Tommy begins to feel a glimmer of hope that he can make something of his life. All that may end however, as a shady character from Aimee’s past makes an unwelcome appearance... From the author of The Weir and The Seafarer comes this stunning Irish drama, one not to be missed.