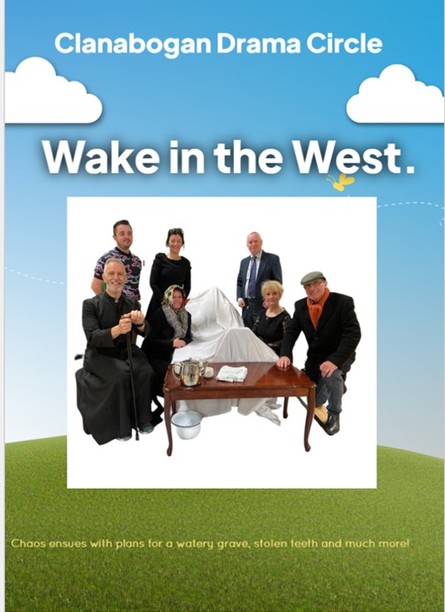 Wake In The West

Clanabogan Drama Circle is delighted to revive the comedy class Wake in the West by Michael Ginnelly. Set in the northwest of Ireland it is a fast paced hugely comedic play centred around the death and subsequent wake of local man Tom Healy and his somewhat unexpected dying wishes. Tom’s controversial last request (for his ashes to be scattered at sea) threatens to humiliate his family and make them the laughing stock of the small fishing village in which they live. Chaos entails as they struggle to come to terms with Tom’s wish for a watery grave and his resting place to be “on the white crested wave.” The priest and doctor need to be consulted, as does Tom’s son Martin who is returning from New York for the funeral (a return eagerly awaited by neighbour Joan who has held a candle for Martin since his departure to the States). When conniving old neighbour Rose calls to pay her respects, the mayhem really develops and her antics set in motion a sequence of hilarious events. With scenes of utter side splitting laughter guaranteed, you’ll never look at a set of false teeth in the same way again!